Abdi Kerta Raharja (AKR), one of MEKAR’s lending partners, is indeed a force to be reckoned with. As an award-winning cooperative, AKR has gained numerous recognitions for its work in providing credit facility for micropreneurs in Banten and West Java. In 2017, AKR received the Bakti Koperasi Award, which was bestowed upon its chairperson Hj. E Farida for her years of service and steadfast dedication in improving the performance of the cooperative she has been leading. 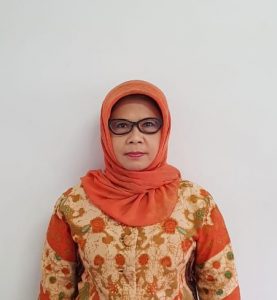 In early April, AKR’s chairwoman Hj. E. Farida also appeared in a full-page feature article written by Kompas journalist Dwi Bayu Radius for the Sosok (“People”) page of Kompas, Indonesia’s largest newspaper. In the April 10 edition of the newspaper, Dwi wrote how Farida was inspired by the success of the Grameen Bank microfinance model, founded by Nobel prize laureate Muhammad Yunus of Bangladesh, in providing financial assistance to the rural poor.

“I did idolize Yunus. When I went to Bangladesh in 2008, I became increasingly convinced of the greatness of Grameen Bank. I see the Bangladesh situation myself,” Farida said as quoted by Kompas.

Farida went on to describe how her experience in Bangladesh and the 1998 financial crisis that gripped Indonesia convinced her to establish a poverty alleviation program in the Tangerang Regency of Banten in 2003. At that time, Farida served as the regional investment head at the regency’s Investment Coordinating Board (BKPM).

Her program made it possible for the poor in the regency to take a micro loan without collateral. A year later, the program proved to be a success; it was adopted by 17 sub-districts in the province and recorded a 0% NPL. 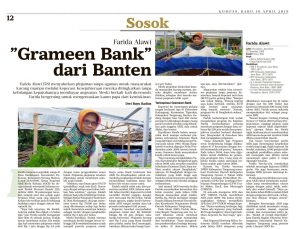 This ground-breaking accomplishment finally led Farida to establish the Abdi Kerta Raharja Cooperative in 2009. AKR adopts the Grameen Bank micro-finance model and has been successfully repeating the success story of providing micro loans for the poor and having most of them repay their loan on time.

Today, AKR lists more than 36,000 members, of which some 30,000 are microcredit borrowers. The cooperative has been a lending partner with MEKAR since March 2017. Mekar.id is an online platform that connects small business owners anywhere in Indonesia who need financing with lenders who are looking for opportunities to fund small business loans and gain profit while creating positive social impact.

As a leading peer-to-peer lending company, MEKAR partners with large and experienced microfinance institutions like AKR that act as MEKAR’s extended teams and interact directly with our borrowers. As of April 2019, MEKAR has listed four prominent savings and loan cooperatives as our lending partners.

Here are some excerpts from the article in Kompas:

In just 10 years, the cooperative has listed a total of 36,350 members with its assets reaching Rp 82 billion. Even without collateral, the nonperforming loan (NPL) rate is very low or never exceeds 0.45 percent.

The cooperative provides loans ranging from Rp 800,000 to Rp 25 million with varied interest rates. Loans of less than Rp 5 million usually taken by small and medium businesses, for example, are subject to an interest rate of 2 percent per month.

Although loans are channeled to the poor, borrowers are diligent in paying their installments. In fact, some of them repay their loans faster.

Not only profit oriented, AKR also applies social care. Since the cooperative was established, for example, 1,000 students have attended the Package C education equivalent to senior high school (SMA) free of charge.

Some of AKR’s profits are also set aside to help the needy, such as by organizing mass circumcisions, home repairs and orphan assistance.