EconomyTak Berkategori
Home›Economy›Fintech in Indonesia : Between Formality of Regulation and Financial Inclusion

Fintech in Indonesia : Between Formality of Regulation and Financial Inclusion

Imagine, you have just ordered a cup of instant noodle at a small shop (warung) in a remote village. The shopkeeper then takes out his low cost smartphone and asks you to put thumb on the smartphone screen to approve the payment. Even before the noodles are ready to eat, your payment from your bank account to the shopkeeper’s account is completed.
Later that day you lend your money to the the shopkeeper via your gadget since you know the creditworthiness of the shopkeeper from your gadget at the same standard as banks assess their debtors.

This is FinTech (Financial Technology), if you wish not to be disturbed by definition. One of the matters not to ignore : it is not only about the advancement of technology, but also financial inclusion. Technology which financially helps people, also those in the farthest villages of Indonesia. And what we imagine is now present in India.

On December 2016, the Indian government through its ambitious project ‘Aadhaar’ has successfully registered 1,09 billion citizens or 85% of its population. Aadhaar is a single identity number containing biometric and demographic data stored in a centralized and online database. It is connected with stakeholders, either government or private institutions, including financial institutions. Through Aadhaar, various community financial transactions and governmental programs run easily, quickly and safely via “thumbprint”.

On the other hand there comes a point where the consumer does not benefit anymore. The picture below shows clearly a situation not of inclusion, but fragmentation. 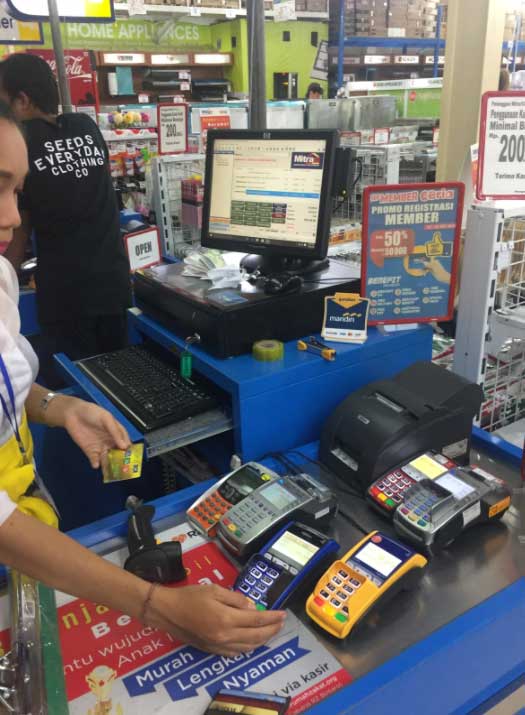 The 6 payment machines at this modern shop show how fragmented the payment systems are. The proliferation of ATMs, one for every bank, shows the same problem. Now with the arrival of ‘e- wallets’ offered by banks and FinTech companies, the fragmentation is increased even more. We seem to be moving further away, rather than towards, the situation at beginning of this story. The shopkeeper and the customer are confused, they only want a simple payment system.

The role of Government and Financial Inclusion

Indonesian Government actually has positive spirit in response to the growth of fintech. It is apparent in the speech of President Jokowi at the opening of Fintech Festival and Conference on August 2016. On December 2016, Financial Services Authority (OJK) issued Regulation No. 77/POJK.01/2016 for P2P fintech lending, after in the preceding month Bank Indonesia (BI) inaugurated BI Fintech Office on November 2016.

However, this positive spirit will stop at the level of formal regulation if not followed up by consistent implementation to achieve financial inclusion.

We may have heard review from the World Bank data where there are only 36% Indonesian citizens with banking access and only 13% enjoying loan facility from formal financial institutions. Or about micro, small and medium-scale enterprise (UMKM) with the largest contribution for GDP and create more than 100 millions of employment in Indonesia, but there is only 20% UMKM with banking access. Unfortunately, the data can only be used as a reference for financial inclusion jargon if we fail to see the phenomenon in a more comprehensive way, such as how many institutions trying to engage in UMKM credit program and failing due to poor credibility of debtors resulting in non-performing loan? Is there any relevancy between reluctance to grant credit to UMKM with the difficulty in screening the UMKM debtor feasible to be financed ?
According to the experience of the author in banking industry, in many financial institutions, either bank or non-bank, great amount of costs have been incurred to perform credit restructuring to UMKM. While, data of debtors with sub-standard quality to non-performing loan in the Debtor Information system (SID) is not accessible yet by majority of non-bank financial institutions. Non-performing debtor is in fact only minority of UMKM, but the major loss potentials due to non-performing loan will cause more financial institutions to strictly assess the loan application by UMKM, including fintech lending companies. In the discussion between the author and management of fintech lending companies, the difficulty to screen non-performing debtors will make their company’s loan approvals only 3% of total loan applications. If this is the fact, then what is the difference between fintech companies and other financial institutions if the advanced technology do not contribute to the financial inclusion ?

Indonesian Government actually has a good momentum this year to drive the financial inclusion through fintech. One of them is the development of Credit Information Services System (SLIK) by OJK to replace SID. There is also emerging private bureau of credit or formally called Credit Information Manager Agency (LPIP) expected to provide more comprehensive credit information and involving more financial institutions.
The momentum can be used to provide easier access to fintech companies dominated by startup companies to be integrated into SLIK. For any fintech startup companies, the requirements to fulfill all customer information in SLIK will become a difficulty as startup companies have been running and have wide range of user basis before regulation on fintech is issued. Fintech startup companies can be given easier requirements to apply for membership with SLIK and be encouraged to fulfill the formal requirements within specified timeframe after becoming members. In the course of SLIK implementation, fintech companies may be involved in the workshop or joint discussion. Government may also support the establishment of more LPIP. Moreover, the emergence of LPIP contributes to indicators of credit access from the World Bank which improve the international rating of Indonesia.

Furthermore, financial inclusion will require supporting ecosystem not only from financial regulatory body such as OJK or BI, but also other stakeholders. For instance, digital signature has been formulated by Law (UU) on Electronic Transaction Information No 11 of 2008 and Government Regulation (PP) Number 82 of 2012 on Electronic System and Transaction. However, have you already had legal digital signature as defined in UU and PP that can be used broadly ? The author is unsure since the Ministry of Communication and Informatics set the target for new digital signature launching in the second quarter of the year through cooperation with the institution authorized to validate digital signature called as CA (Certification Authority). Looking at India, access to information and simple validation of identity is one of the key factors in the financial inclusion. Indonesian government has formulated this since long ago, but unfortunately it takes a long journey to the stage of implementation.

At the end, fintech contribution and hopes of fintech will be much influenced by the role of the government not only through formal regulation, but more importantly how the regulation can strongly encourage all stakeholders to create the ecosystem supportive to the financial inclusion.