2019: A Year of Achievements, Growth, and Impact

The year 2019 was an amazing year for MEKAR. It was the year that we welcomed 11 new lending partners into the MEKAR family to originate more loans for our platform. It was also the year we gained numerous recognitions and accolades, including an international award for The Best P2P Platform in Indonesia. 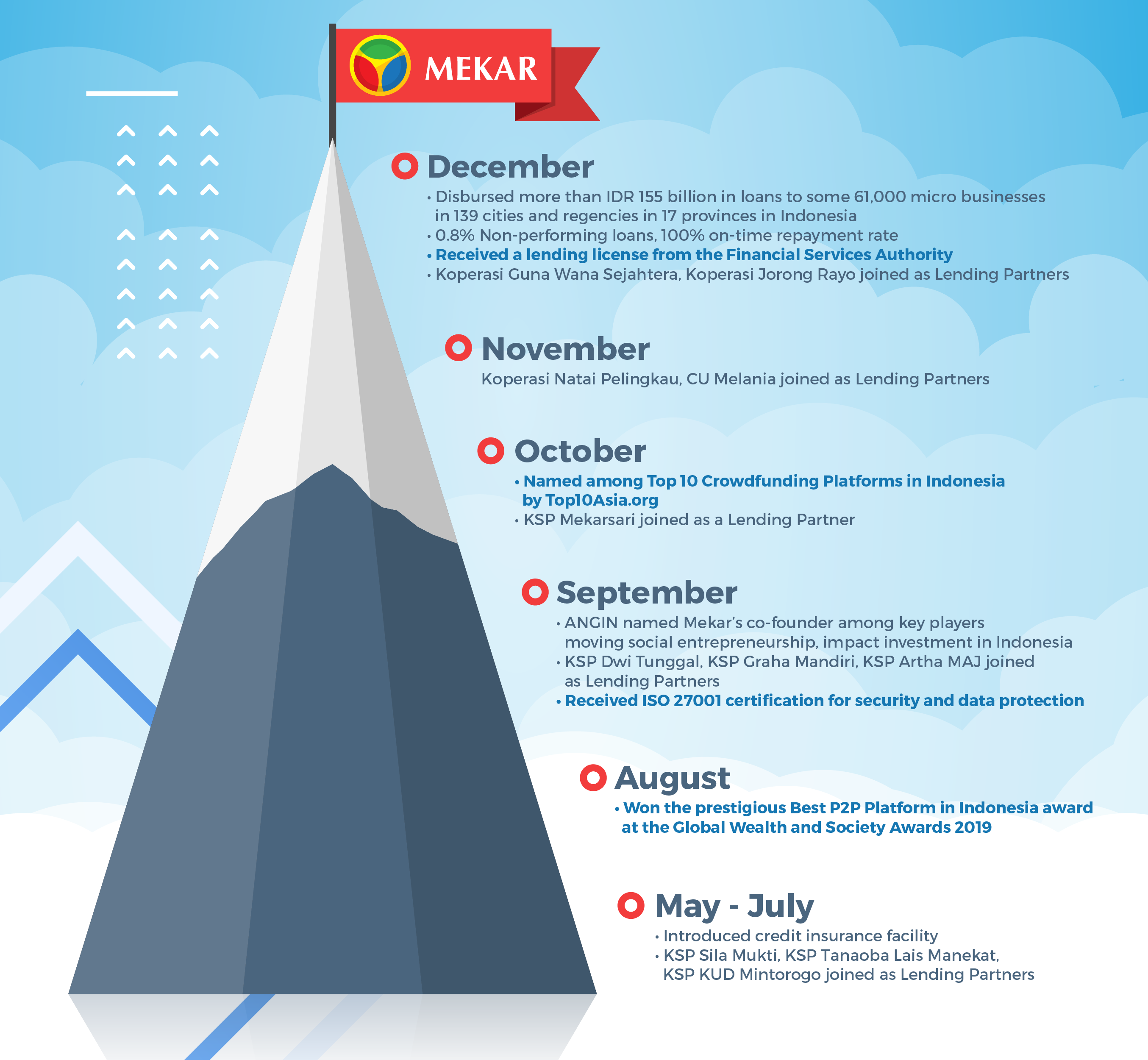 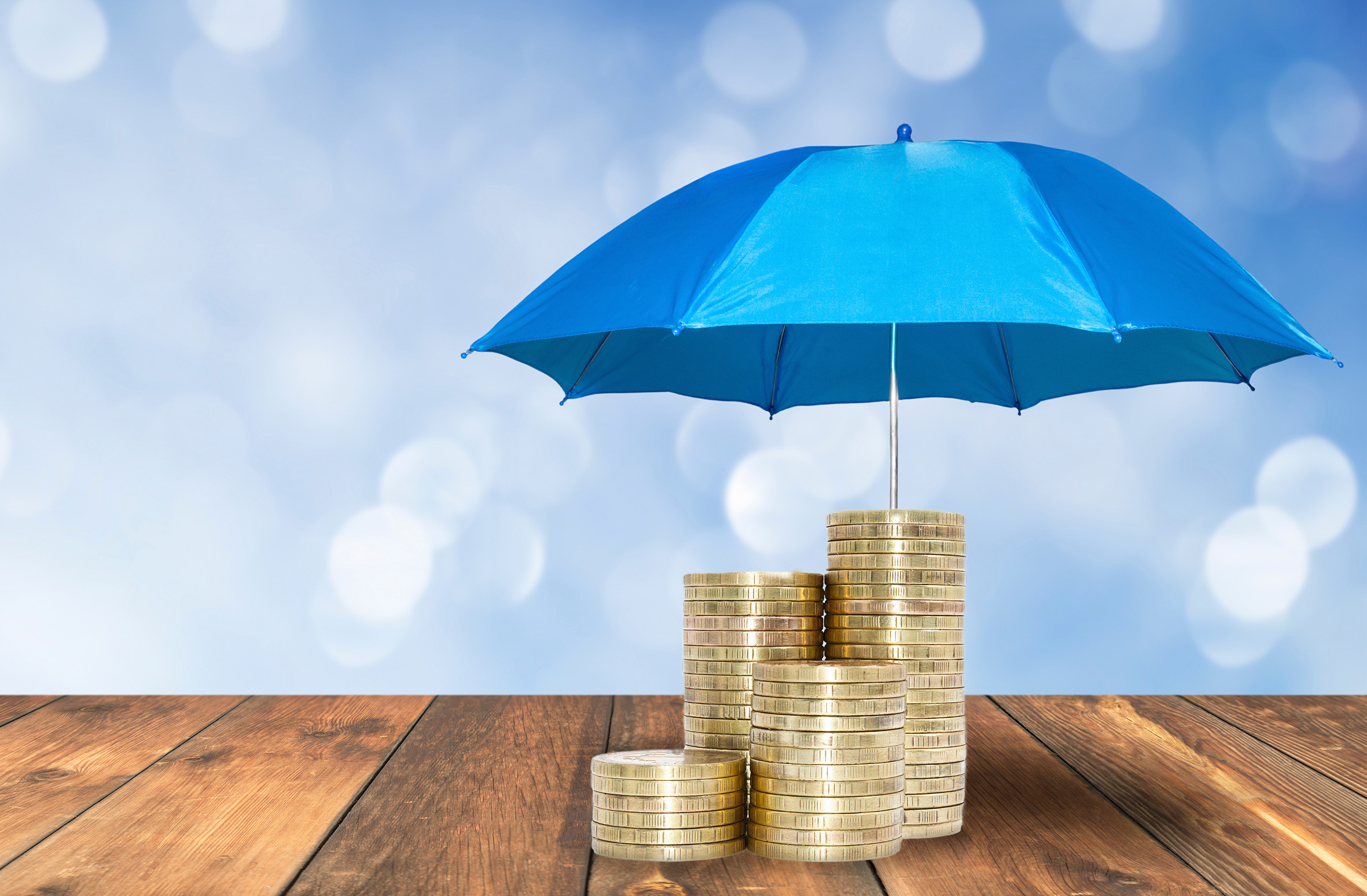 At the start of 2019, we were hard at work developing a new facility that offers our lenders more peace of mind when funding MSME loans via our platform. The credit insurance facility was launched in June 2019 and covers the repayment of up to 80% of the principal portion of the loans originated by lending partners with a higher risk rating. Read more about credit insurance facility in MEKAR here. 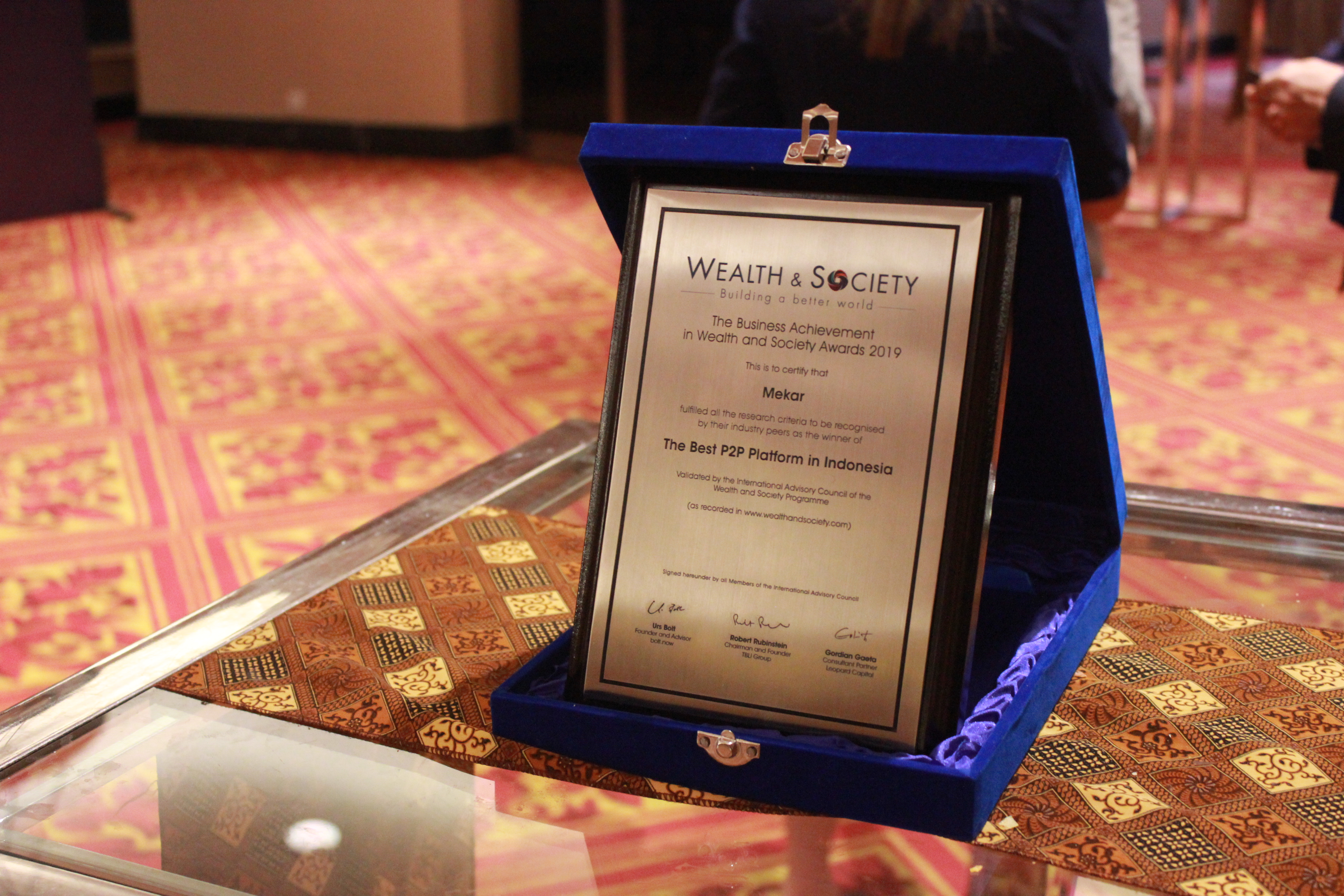 The Best P2P Platform in Indonesia award plaque that was awarded to MEKAR.

We were honored to receive an international award for the Best P2P Platform in Indonesia from the Global Wealth and Society Awards 2019, which was organized by the Asian Banker. The award further highlights MEKAR’s commitment to increasing access to finance for micro business owners in archipelagic Indonesia.

In September 2019, a recognition came from Angel Investor Network Indonesia (ANGIN) for Mekar’s co-founder, Thierry Sanders. In its report, ANGIN named Thierry as one of the entrepreneurs who are highly contributing to the development of social entrepreneurship and impact investment in Indonesia.

Wrapping up the month on a high note, MEKAR received ISO 27001 Certification for its information security management system. Being ISO 27001 certified means that MEKAR always make efforts to follow internationally recognized guidelines and best practices for the management and security of our users’ data. 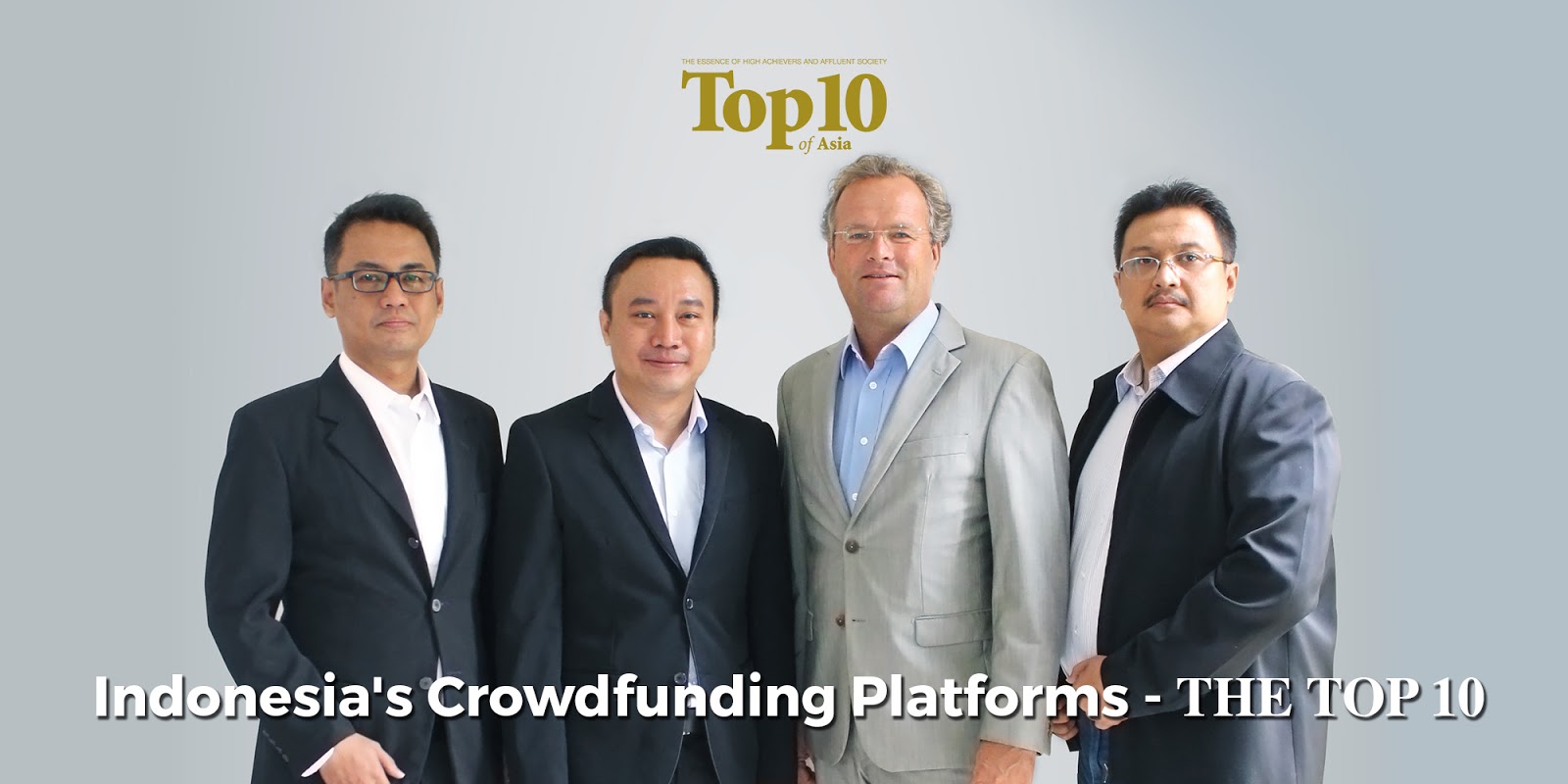 Top10Asia.org put MEKAR on its list of Top 10 Crowdfunding Platforms in Indonesia

Top10Asia.org put MEKAR on its list of Top 10 Crowdfunding Platforms in Indonesia, adding to a growing list of accolades for MEKAR.

We also added another cooperative, KSP Mekarsari, as our Lending Partner in October last year. 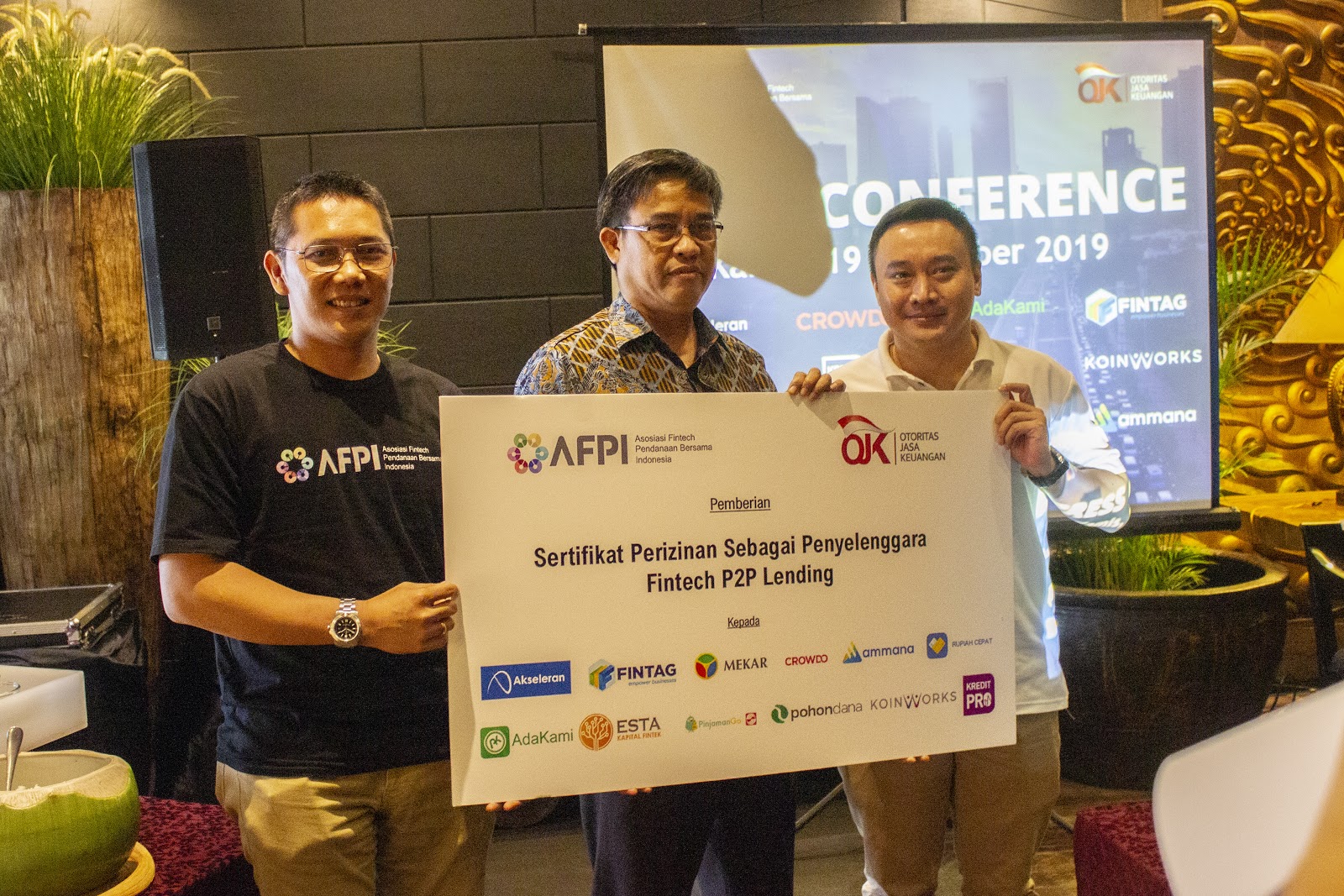 As the year drew to a close, our little team was presented with a wonderful gift. MEKAR officially received our lending license from the Financial Services Authority (OJK). The license was issued by the OJK in a letter number KEP-127/D.05/2019 on December 18, 2019, and marks the end of an amazing year for all of us in MEKAR.

The icing on the cake is to learn how we’ve also grown our impact this year by reaching out to micro businesses in more cities and villages than we did in 2018. In 2019, we facilitated the funding of loans to micro business owners in 139 cities and regencies in 17 provinces in Indonesia.

Here are our numbers so far: