The HARKOPNAS EXPO that was held in the city of Makassar, South Sulawesi, to celebrate the Cooperative Day that falls on July 12 has concluded. Amid all the festivities in the event whose attendance listed Indonesian President Joko Widodo, a lending partner with Mekar had an important moment when it received a national level award in the cooperative sector.

The Abdi Kerta Raharja Cooperative succeeded in bringing home the Bakti Koperasi Award, which was bestowed upon its chairperson Hj. E Farida for her years of service and steadfast dedication in improving the performance of the cooperative she has been leading.

Hj. Farida was one of 134 figures from the cooperative sector from across the country who received the award handed by the Cooperative and Small and Medium Enterprises (SMEs) Minister Anak Agung Ngurah Puspayoga on Tuesday (11/7). The award ceremony was a part of the five-day Harkopnas Expo. 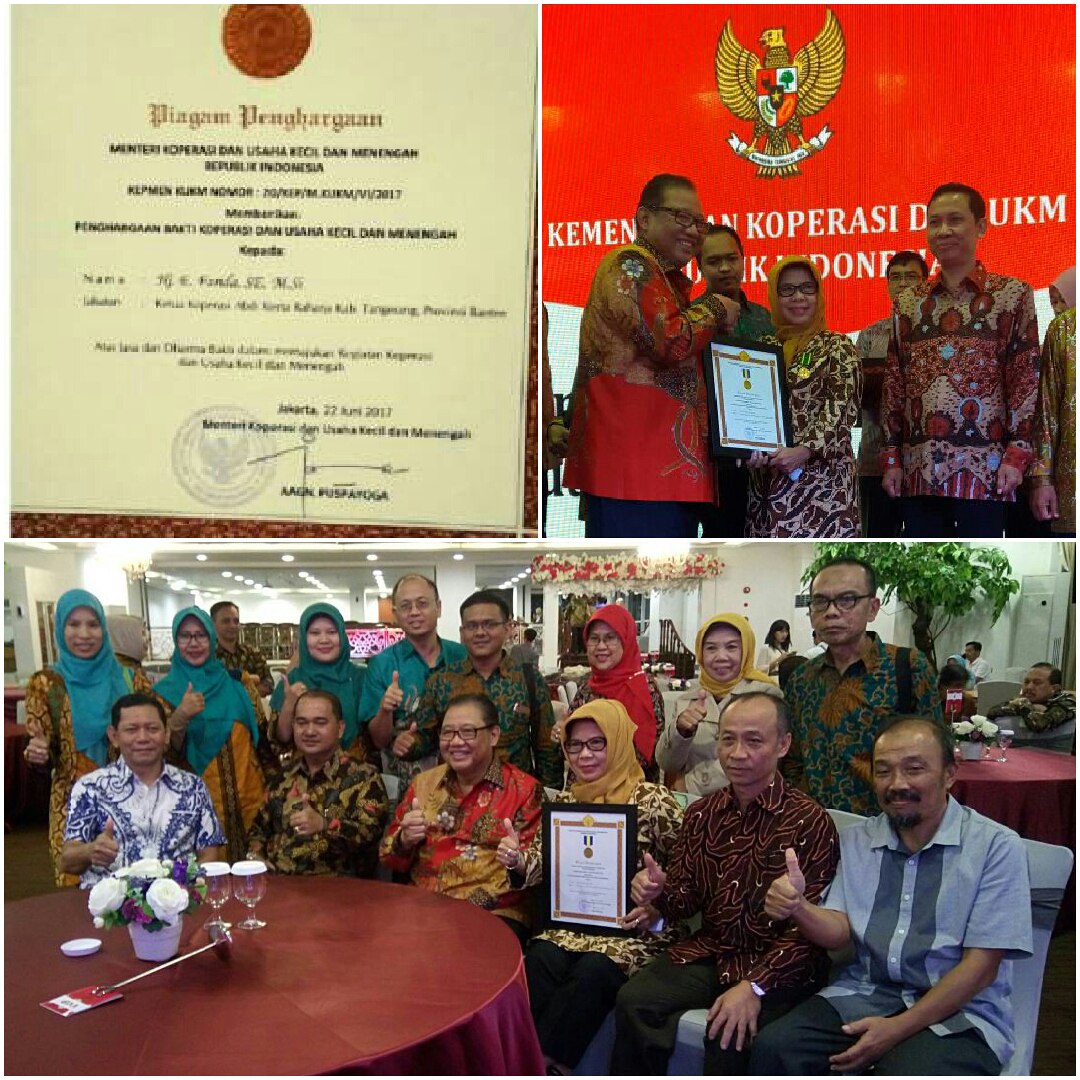 The Abdi Kerta Raharja Cooperative succeeded in bringing home the Bakti Koperasi Award, which was bestowed upon its chairperson Hj. E Farida

“High quality cooperatives has been giving real contributions to growth in our gross domestic product, entrepreneurship and the e-Commerce business,” Puspayoga said, as quoted by Rmol.co.

Abdi Kerta Raharja is one of those high quality cooperatives Puspayoga was referring to. The cooperative is also a lending partner in Mekar (PT Sampoerna Wirausaha). As a fintech company focusing in peer-to-peer lending, Mekar always strives to establish close partnerships with large and experienced cooperatives in Indonesia.

Aside from Abdi Kerta Raharja, another lending partner in Mekar is the Mitra Dhuafa Cooperative (Komida). These partners of Mekar are prominent cooperatives that act as Mekar’s extended teams and interact directly with our borrowers, the owners of micro, small and medium sized enterprises (MSMEs) in Indonesia.

By winning the award, Hj. Farida as the chairperson of Abdi Kerta Raharja proved once again that the cooperative she is leading is a force to be reckoned with among those in the sector.

The cooperative has previously won many other awards, including the KSP Award in 2014. The prestigious award was given by the Cooperative and SMEs Ministry to ten of the best savings and loan cooperatives in Indonesia and Abdi Kerta Raharja won in the category “fastest growth in membership”.

Read also : Mekar Signed an Agreement with Komida, 100s of Women Businesses to be Funded

Today, Abdi Kerta Raharja lists more than 56,000 members, of whom 17,000 are microloans borrowers. Abdi Kerta Raharja takes inspiration from the principles of cooperatives defined by Mochamad Hatta, the “Father of Indonesia’s Cooperative”, and the spirit he exemplified. Adopting the Grameen Bank concept propounded by Nobel prize laureate Muhammad Yunus of Bangladesh, Abdi Kerta Raharja and its micro credit scheme has benefited its members, the “unbankable” members of the society.

The cooperative was officially named a lending partner with Mekar in March this year. Mekar uses an online peer-to-peer lending platform to connect small business owners anywhere in Indonesia who need financing with investors in big cities looking for an investment alternative that is safe, profitable and beneficial to the growth of the local economy.

This partnership with Mekar will allow Abdi Kerta to quickly finance their members’ micro loans. Meanwhile, investors in Mekar will be able to finance more small business loans.