Against the Odds: Repayments to Mekar’s Lenders at 100% Amidst Rise in P2P’s NPL Rate

Indonesia’s peer-to-peer lending platforms and online payday lenders are changing the face of the consumer lending and business lending industries in the country and they are burgeoning by the day. But the budding online lending sector is now facing a new hurdle. It’s NPL (non-performing loans) ratio is on the rise.

The industry defines a non-performing loan as a loan that is in arrears for more than 90 days. The Financial Services Authority (OJK) said recently that as of February this year, the NPL ratio among financial technology firms that facilitate peer to peer lending, including payday loan lenders, was at the 3.18% mark. This number is significantly higher than the sector’s NPL ratio recorded in December 2018 (1.5%) and in January 2019 (2%). 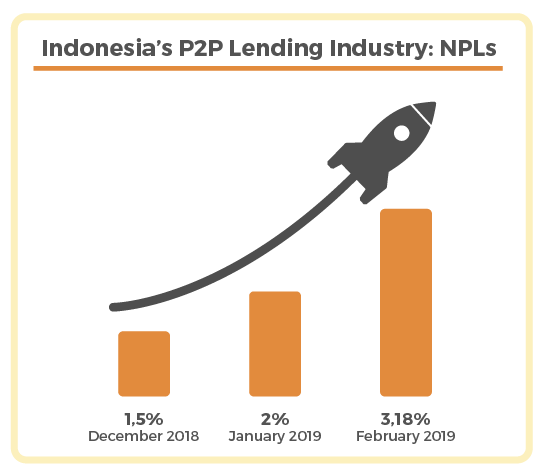 The rise in P2P lenders’ NPLs means there’s a growing number of loans that have fallen into arrears or default. For lenders, this means they need to be extra prudent when choosing which P2P lending platform to use so that they can reduce their risks.

The good news is, despite the rising trend of bad loans in the industry, fintech lender MEKAR continues to maintain its successful repayment rate at 100%. Since January 2017 when MEKAR first launched its online lending platform, Mekar.id, all lenders in MEKAR have been enjoying getting their repayments on loans that they have funded.

A much lower NPL ratio

MEKAR calculates its NPL ratio by averaging the NPL ratios of its lending partners. MEKAR’s lending partners are financial institutions (such as cooperatives and rural banks) that helps MEKAR in finding and selecting borrowers, disbursing loans, collecting and processing the loan repayments to MEKAR’s lenders.

Today, MEKAR partners with four savings and loans cooperatives, namely Koperasi Mitra Dhuafa (NPL rate of 0.72% in April 2019), Koperasi Abdi Kerta Raharja (0.44%), Koperasi Karya Usaha Mandiri Syariah (0.05%), and Koperasi Syariah BMT ItQan (0.90%). The average of all partner’s NPL ratios, and thus MEKAR’s NPL ratio, is around 0.52%. This number is much lower than the industry average. This is the ratio of loans within MEKAR’s partners’ portfolios that have performed poorly; that is, the borrowers are more than one day late in their payment.

MEKAR’s success in maintaining a 100% repayment rate is due to a sound risk mitigation strategy that includes stringent partner and borrower selection processes. For example, in selecting borrowers; MEKAR only allows those with good credit history to have their loan funded via its platform. Furthermore, MEKAR does not offer consumptive loans; all loans in MEKAR are productive loans. This way, borrowers in MEKAR are less likely to fall into arrears or default.

MEKAR also goes the extra mile to protect lenders’ money. Some loans in MEKAR are now insured at no cost to either the borrowers or the lenders. Credit insurance covers the repayment of 40% up to 80% of the loan principal. You can also learn more about credit insurance in MEKAR by clicking here.

If you are looking to fund loans via peer-to-peer lending, choose your platform wisely. That way, you may reduce the risk of losing your money. To fund Indonesian MSMEs loans and help create positive social impact, head to https://mekar.id.

Read also: Four Things You Should Know About a Peer-to-Peer Lending Platform Before You Lend